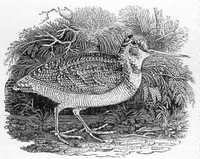 Among the traditional printmaking techniques, wood engraving is a relatively recent arrival on the scene. Its development is attributed to Thomas Bewick, a late eighteenth century English gold engraver. Bewick developed the process in response to a quandary facing the printing industry since the invention of moveable type: how to print pictures and type on the same page. The primary printmaking techniques of the time were steel and copper (both engraved and etched) and woodcuts. Steel and copper engravings used a method of printing (intaglio) which involved a different inking and a different type of press. Woodcuts, while they could be printed on the same press with type, did not have the strength to stand up for a press run of any length. Bewick's solution was to mill very dense wood (boxwood) to the same thickness as lead type and to expose the endgrain as the surface to be printed. The use of endgrain gave blocks the strength to endure long press runs and the ability to accept finely engraved lines. Bewick then utilized the techniques of traditional engraving, but with a twist. Traditional engraving is an intaglio process where ink is forced into the engraved cuts, and the surface of the  plate is wiped clean and printed under enormous pressure to force the paper into the cuts to absorb the ink. The resulting print would be black where the plate was engraved. Bewick, while using the same technique of engraving, printed the block as a relief print, inking the surface of the block and printing with little pressure, allowing the block and type to be inked simultaneously. The resulting print would be white where the plate had been engraved.

These innovations spread rapidly, and, by the early century, wood engraving predominated in the illustration of books, magazines and newspapers. During that period literally thousands of engravers found employment in a booming industry that ran the gamut from large publishing houses to small local newspapers. For the most part those trade engravers were an anonymous group, yet they set the visualization standards for the nineteenth century in the same way that photography, movies and television have for the twentieth. By the end of the century, various new photomechanical processes forced the rapid demise of wood engraving in the media.

In the twentieth century, wood engraving, rejected by the art community of the previous century as being merely a reproductive technique, enjoyed a modest revival as a fine art. This movement began in the 1930's among progressive artists who envisioned the process as a means of bringing affordable art to the masses.